The 2009 National Latino Writers Conference in Albuquerque, NM: Part I

From May 21st through the 23rd of this year, I had the pleasure of participating in this wonderful yearly event as a guest faculty member. As such, I took part in a panel of editors, and provided attendees with one-on-one editorial consultations. I know that with the current speed of Internet news this probably seems like ages ago, but I wanted those who did not have the fortune of attending this conference to benefit from my participation, so I've decided to write about it, and to post interviews I conducted with some of its participants, as well as valuable writing tips from published Latino authors who directed workshops during the three-day event. Who knows, perhaps some of this information will entice some you to attend the conference next year! Since I intend to provide quite a bit of information, I will do so over a series of posts. So stay tuned, there is plenty more coming. And let me know what you think!

First, I want to acknowledge the wonderful people who put the conference together: Carlos Vázquez, Director of the History and Literary Arts Program at the National Hispanic Cultural Center, where the event is housed, Senior Librarian Greta Pullen who personifies poise and grace, and their dynamic Administrative Assistant, Kate Trujillo, without whom, I’ve been told, the conference may not happen at all! Thank you all for your warm hospitality; you really make this a special event for all involved.

As you might have already guessed, I really enjoyed participating in this conference. But this should come as no surprise, since, in just 7 short years, it has quickly become the most important writers conference in the country for aspiring Latino authors. And why wouldn’t it? Enrollment is limited to 50 registrants, and with 20 faculty members available on any given year, the personalized service provided by this conference is unmatched, particularly considering its rather low enrollment fee. The conference also confers two important awards: The annual Premio Aztlán founded by Rudolfo Anaya and his wife Patricia in 1993 in an effort to encourage and reward the work of Chicano/a authors, and the biannual National Hispanic Cultural Center Literary Prize, or NHCC. The premio Aztlán was moved to the National Hispanic Cultural Center in 2008, and the ceremony became a part of the National Latino Writers Conference during that year as well.

But what makes this conference so wonderful is the caring people who put it together, and who make every effort to ensure that all in attendance get the most they can out of the experience. It is for this reason that I decided to take advantage of Carlos Vázquez’s generosity by asking him to sit down with me and tell me a bit more about what makes this event work. Here is what I learned:

Carlos Vásquez was a faculty member at the University of New Mexico from 1991 to 1999; from 1992 to 1997, he represented the university alongside historians, anthropologists, people in the arts such as musicians, authors, and others, on a design committee that worked together to conceive what would be then called the Research and Literary Arts Program: a documentation center for Hispanic culture consisting of video collections, publications, a library, and archives. Eventually, the center morphed into the current History and Literary Arts Program (HLA), charged with documenting and preserving Hispanic history, culture, and literature. The HLA permanent collection encompasses over 14,000 books, full text electronic databases, 2,000 rolls of microfilm, hundreds of video and audiotapes, and manuscript and photo archives—all concentrated on the history of Hispanics worldwide with a focus on the U.S. Southwest. The HLA programs include historical exhibits based on family and community histories, seasonal book signings, lectures, short courses (Cursillos), a World Book Day/ Día del Libro celebration, and of course, the National Latino Writers Conference. 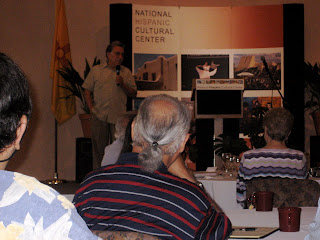 Carlos Vásquez, Director of the History and Literary Arts program at the National Hispanic Cultural Center welcoming participants to the 2009 NLWC.
“We started this event with one ad in Poets and Writers,” say Carlos Vásquez, noting the preexisting need for a conference of this nature. “From that ad alone, registration filled up quickly, and we ended up with a waitlist of 13 authors from all over the country; at that point, we knew we were onto something.” Carlos is particularly proud of the conference’s famously warm environment: “The experience of being here alone is worth it, and is what has participants come time and time again; it is what has spread the word about the conference and filled it, year after year, along with the fabulous guest faculty we showcase.”

And with workshops ranging from poetry to children’s literature, and panels of editors, agents, and publishers, this conference’s popularity shows no sign of fading. Not to mention that it has borne fruit: participating writers have found agents and publishers for their work, in part because the industry folk who attend it are really interested in finding Latino talent; in part because of the great pains the organizers go through to make sure that everyone gets to know everyone else, and to showcase the writers in attendance. (This year saw the launch of new “Open Mic” sessions that enabled writers to read before all those in attendance, providing them an opportunity not only to share their work, but also to exhibit their presentation skills, and many authors took full advantage of that opportunity.)

This new feature is but one of many planned in a conference that is ever evolving to better adapt itself to the needs of its attendees, and the market. “Plans are already underway for next year to include new workshops for illustrators, travel writers, and in Spanish, for Latin American writers who have moved to the U.S.,” says Carlos, who, when discussing the current state of the U.S. publishing industry is quick to note: “writing is as important as ever.” What can one add to that? Maybe just that it’s nice to know that this conference has its priorities straight.

For more information on the National Latino Writers Conference, and the rest of the programs at the National Hispanic Cultural Center, click here.
Posted by Adriana Dominguez at Sunday, June 21, 2009