For my second installment in my series of posts following up the conference, I would like to print some of Dr. Felipe Ortego y Gasca’s enlightening comments during his opening keynote address. For those of you who may not know, Dr. Ortego y Gasca has long been considered the founder of Chicano Literary Studies. His seminal work, entitled Backgrounds of Mexican American Literature (Univ. of NM, 1971), was the first study published in the field. He is also credited for being the first to write on the subject of Chicano literature for a major publisher with his We Are Chicanos: Anthology of Mexican American Literature (Washington Square Press, 1973). It was truly an honor for me to get an opportunity to see him speak at this conference, and I would like to pass some of that honor on to you. 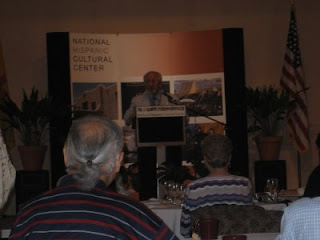 Ortego y Gasca addressing the participants of the 2009 National Latino Writers Conference.
During his talk, Ortega y Gasca offered these encouraging words to the Latino authors in attendance: “We are still in our gestation period, 1973 is not that long ago”—referring to the date of publication of We Are Chicanos— and adding: “We have to recover the U.S. Latino saga; my family’s history in the U.S. dates back to 1731, before 1776”—obviously pointing to his own Mexican roots, and maybe alluding to that old Southwestern saying: “We didn’t cross the border, the border crossed us.”

He went on to make a distinction between Latin American writers living in the U.S.—who are very much connected to the literary tradition of their homelands—, and Latino Writers— whom, he pointed out, should be identified as U.S.-based Latino authors, such as Sandra Cisneros. I wanted to print this remark in particular because he went on to state that “this distinction is seldom made (by publishers, readers, and the general public), exhibiting a basic misunderstanding and ignorance of the work of U.S. Latino writers, which dates back to the roots of this country—and has a long future ahead.”

Ortega y Gasca also mentioned the demographics with which my readers are already very well acquainted, putting them into perspective, and within the literary context. He said: “By 2040, 1 in 3 Americans will be Latino, and this demographic is changing from the inside, not through immigration.” (Referring to the fact that 1 out of 2 babies now born in the U.S. is of Latino heritage.) “Every county in the US now has Latinos in it.” (A fact that I, for one, was not aware of, and which I found fascinating, since it has endless implications.) Finally, referring to what he dubbed the “tsunamic demographic change” that we are about to face, Ortego y Gasca offered these very simple, wise words to present and future Latino writers: “We should not waste it.”

I hope you are enjoying these posts on the NLWC. Check back at the end of this week, when I will be posting the first of a series of writing tips by some of the published authors who attended the conference.

For more information on the National Latino Writers Conference, and the rest of the programs at the National Hispanic Cultural Center, click here.
Posted by Adriana Dominguez at Monday, July 06, 2009