And the Awards Go To... (What a Wonderful Surprise!)

Here is a nice follow up to the last post that could not wait until my return to the States:

On Monday, the American Library Association (ALA) released its official announcement of their Youth Media Awards for 2009:

The following is a listing of the 2009 Pura Belpré Awards, which honor the work of Latino authors and illustrators "whose work best portrays, affirms and celebrates the Latino cultural experience in children's books." (It is worth mentioning that the previously biannual award will be granted annually from now on.)

The 2009 Belpré Illustrator Award went to Yuyi Morales for “Just in Case," published by Roaring Brook Press, a division of Holtzbrinck Publishing Holdings Limited Partnership. The book is a follow up to Morales´ 2004 Belpré winner "Just a Minute."

The 2009 Belpré Author Award went to Margarita Engle for “The Surrender Tree: Poems of Cuba’s Struggle for Freedom” published by Henry Holt and Company, LLC. This marks Engle´s second consecutive win; she won the award last year for "The Poet Slave of Cuba: A Biography of Juan Francisco Manzano."

And perhaps the biggest surprise of the year: In addition to receiving this year´s Belpré Medal for narrative, Margarita Engle´s “The Surrender Tree: Poems of Cuba’s Struggle for Freedom” was also named a Newbery Honor Book! A first for a Latino author!

So let´s congratulate all of this year´s winners, and celebrate this new milestone! This is already shaping up to be another wonderful year for Latino literature! ¡Felicidades!

For a complete listing of ALA´s Youth Media Awards for 2009 go to: http://www.ala.org/ala/newspresscenter/news/pressreleases2009/january2009/ymawrap.cfm
Posted by Adriana Dominguez at Monday, January 26, 2009 1 comment:

An Update and Some Shameless Promotion

I am out of the country until the first week of February, when I will resume posting. In the meantime, I want to let you know that I continue to work on future posts that I hope will be of interest to you, and that I am still open to ideas and suggestions, so keep those coming, and keep visiting and subscribing! 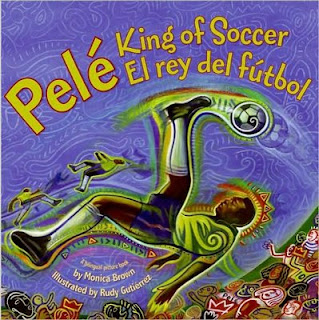 I can´t resist taking advantage of this forum to share some news as well: On January 1st of this year, Rayo published the bilingual Pelé, King of Soccer/ Pelé, El rey del fútbol, by award-winning author, Monica Brown. I am letting you know about it not because I edited the book, as many of you already know, but because I really believe that it is excellent, and worth knowing about. And I am not alone: Pelé has already received many positive reviews, two of them starred. Since this blog is about promoting and supporting the work of excellent Latino authors and illustrators, I wanted to share the excellent work that Monica Brown and Rudy Gutiérrez did on this book and encourage you to check it out. You can find a link to both the author and illustrator´s websites on this page. Monica´s page has links to the reviews and to an interview I did with her for Críticas magazine. Personally, I think that this book represents the first opportunity to help make this the year that we celebrate Latino children´s literature! Buy It Here
Posted by Adriana Dominguez at Monday, January 26, 2009 No comments:

Those who know me are well acquainted with my incurable optimism and can-do attitude. They count on me to see the good side of things and find solutions to problems—and I often do both. Looking back over this past year however, it seemed that I might have my work cut out for me. Because, Obama’s historic win aside, not much “good” seems to have taken place in 2008. When looking back, most will (rightly) recall a year riddled with layoffs, corporate bailouts, bonus and hiring freezes, and a general feeling of hopelessness, even among those who were “lucky” enough to remain employed.

But those of us who care about Latino literature can look back on this past year with a sense of pride, even renewed hope. We can and should remember that something truly great happened in 2008: some of our best and brightest (and in some cases, youngest) Latino authors received an unprecedented and well deserved amount of recognition; the kind hereto reserved only for Hollywood celebrities. It all started with Junot Díaz’s The Brief and Wondrous Life of Oscar Wao winning the Pulitzer Prize for Fiction. In 2008 it seemed as though Junot was everywhere: On bestsellers lists—in both English and Spanish—, and on English and Spanish language media (Who can forget his appearance on the Colbert Report? And, ask a Univison viewer about him and they will say: “Junot has not forgotten where he came from,” or “I was surprised by how good his Spanish is!”). Yes, Junot became a bona fide literary celebrity over the past year. But he was not the only one who would receive that much-deserved praise.

Next, came the PEN USA awards. I had to read the announcement twice to make sure that I had not misread the names of not one, but TWO Latinos on the awards list. Yes, it was true! Daniel Alarcón had won the Fiction Award for Lost City Radio, and my dear friend Juan Felipe Herrera had (finally!) won the Poetry Award for his 187 Reasons Why Mexicanos Can’t Cross the Border! That was the moment when I decided that Latino authors were on a roll in 2008. They were unstoppable. Even a deceased Latino author received praise when Roberto Bolaño’s 2666 made The New York Times’ “Best Books of 2008” list! And so, my optimism preserved, I set out to write a post about all of the accomplishments that have made 2008 a great year for Latino writing.

And then came the sobering reminder that there is still much work to be done, in the form of Melita Marie Garza’s piece for Bloomsberg News, published on the second-to-last day of the year (a portion of which was reprinted in The New York Times on that same day). The article refers to a recent study that reveals a steady decline in the representation of Latino and African- American characters in Newbery Award winners. The article quotes authors such as Sherman Alexie and Julia Alvarez, as well as Pat Scales, the president of ALSC (the Association for Library Services to Children that runs the Newbery Award). I think it is worth reading, so I am sharing it here:

You may draw your own conclusions after reading the article, but here is what I propose:

I propose that we use the momentum gained in 2008 to concentrate on providing the same amount of support granted to adult Latino literature to children’s Latino literature. Let’s remember that 1 in 4 children younger than 5 living in the U.S. is now of Latino heritage, and that it is they who will carry our culture and tradition to future generations.