It's been a interesting time to be Uruguayan this year; Eduardo Galeano made his way into the world's spotlight—and the #1 spot on best sellers lists— after Hugo Chávez handed a copy of his Open Veins of Latin America to President Obama. Uruguayan-American Carolina de Robertis' debut novel The Invisible Mountain, is said to be positioned as a lead title when Knopf releases it in 8/09. And it's only May. Uruguayans are just not used to this much attention.

Being born in a country wedged between two Latin American giants, with a total population of just over 3 million,  generally makes you feel like a drop in the bucket. Uruguayans often resign themselves to a certain degree of anonymity, especially abroad. Not much is known about us; there aren't many "Uruguayan" stereotypes to pull out of a hat to enable others to jump to conclusions, and many people can't locate us on a world map. There's always our famous beef, but that is something that we share with Argentina, so it doesn't do much toward identifying us as a singular people. To be fair, we have ourselves struggled with our national identity, but that is a different matter. The fact is, Uruguayans are a quiet bunch in many ways.

But we could always count on Benedetti to speak for us. Mario Benedetti was probably Uruguay's best-known writer. More than the pivotal Onetti, more than the fiery and controversial Galeano, despite the latter's resurgence. Because Benedetti's readers truly love him. They cherish the nostalgic quality of his prose, and yearn for his evocative poetry. The magic of Benedetti has always been the simplicity and universality of his message. In a way, Benedetti personified what it is to be Uruguayan on a world scale, which is probably why I always brought him up in conversations with non-Uruguayans. And it never failed; those who knew him, always loved him.

Benedetti had been ill for over a year, and on May 17th, his body finally gave out and he passed away at the age of 88. I encourage you to take a look at the video below, and to celebrate the life of a simple man who, with the help of words, his only tools, carried out a very important duty: He reminded us how to be human.

ADDENDUM: To hear my interview with Mario Hinojosa of Latino USA on the life of this iconic Latin American author, and see more video of Benedetti reading, go to: http://latinousa.kut.org/842/
Posted by Adriana Dominguez at Monday, May 18, 2009 2 comments: 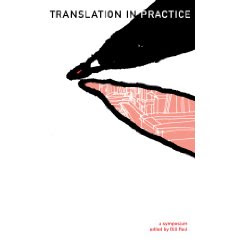 Some of you have requested coverage on the topic of translation, and, as a translator myself, I am happy to oblige: I just received word that the University of Illinois’ Dalkey Archive Press, in partnership with the Society of Authors, the British Council, Arts Council England, and the British Centre for Literary Translation, announced the publication of Translation in Practice: A Symposium, edited by Gill Paul.

Based on a conference held at the British Council in London in February 2008, Translation in Practice is part debate and part handbook, an attempt to establish best practices for writers, editors, translators, and anyone else involved in the business of literary translation. With a preface by Amanda Hopkinson, Director of the British Centre for Literary Translation, this volume brings together the experiences, opinions, and ideas of top editors and translators from both the U.S. and UK. Participants include:


Translation in Practice is the first of a series of books Dalkey Archive Press will publish on the art of translation. It will be followed by a new edition of Suzanne Jill Levine’s The Subversive Scribe, forthcoming in October 2009. Suzanne Jill Levine has translated a number of Latin American greats into English, including Jorge Luis Borges, Adolfo Bioy Casares, Guillermo Cabrera Infante, Julio Cortazar, Jose Donoso, Carlos Fuentes, Silvina Ocampo, Alejandra Pizarnik, Julian Rios and Severo Sarduy. I plan on getting a copy Translation in Practice to evaluate its usefulness for myself and to read about the ideas it exposes on the subject. I highly recommend Levine’s book to all translators and those interested in translation. It will make you think about the art of translating in an entirely new way. If you have read either of these books, I invite you to comment and share your thoughts on them.

Hachette Book Group has generously provided copies of 5 of their new books by Latino authors to give away to readers of VOCES in honor of Latino Books Month.
Five winners will received the whole set of five books!
To win your copies, do the following:
*Those who are already followers of the blog also qualify for the giveaway. If you are a follower, please let me know in your email message, and include the rest of the information requested.
Five winners will be chosen randomly on the last day of Latino Book Month, May 31st. Winners will be announced on the site on JUNE 1ST, 2009. Good luck!
To find out more about the books, click on their titles below: